Darwin’s outfit is nothing luxurious, but way more than what a chimpanzee is used to. For starters, he wears a white and blue striped tank top. Debbie’s lucky tank top to be precise. He also wears blue shorts. Depending on the weather, he’ll wear variants of this outfit, but it’s always a striped top and blue shorts to adapt the theme to the environment. That’s it for Darwin, but you may need an extra layer of clothing to look like this chimp.

For example, you’ll probably want to get a chimp mask and a nice combo of gray, spandex t-shirt and leggings. You’ll need these last two to replicate Darwin’s gray fur without pouring gray body paint all over your arms and legs.

How to make Darwin Thornberry Costume If you want to go the extra mile, get yourself a bag of cheese puffs, Darwin’s favorite snacks.

Darwin is a chimpanzee adopted by the Thornberry family, but make no mistake, just because he is an animal it doesn’t mean he is treated like a pet. No, he is a esteemed, beloved and valuable member of the family. Nigel and Marianne were out filming chimpanzees one day and they came across this particularly friendly chimp.

Eliza wanted to communicate with him as they seemed to get along so well, but she didn’t have her gift yet. It wasn’t until Eliza was granted the power of talking to animals that she could actually understand Darwin and talk to him. In fact, Darwin was the first animal Eliza ever spoke to, thus revealing his fancy British accent, which turned out to be funny and ironic considering he’s a chimpanzee born and raised in the jungle.

Darwin is to Eliza what Jiminy Cricket is to Pinocchio. He is supposed to be voice of conscience of this 12-years-old girl thirsting for adventure. He tends to warn her not to talk to dangerous animals, but fails to convince her. He’s always hesitant to go on adventures with Eliza and constantly complaining when they’re out in the wilderness. If it were up to Darwin, he’d spend most of the day by chilling by the Thornberry’s comvee. 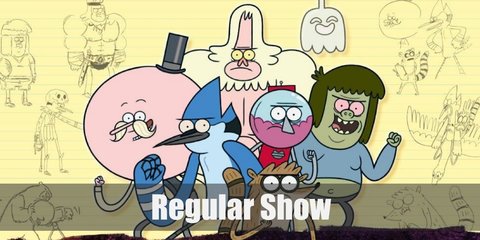 Rigby's costume can be recreated with a raccoon onesie or with a raccoon-type hat, rounded glasses, and fleece jackets.
Some of the links may be affiliated. When you buy through our links, we may earn small commision. Read Full Disclosure. Thanks for supporting us.